German publisher Zoch Verlag has announced three new titles for release in the first half of 2022, down from its usual four, a reduction similar to what some other German publishers are doing.

• Fruddel Muddel fits Zoch’s punny naming tradition, and in this 2-5 player design from Daan Kreek, your challenge is to grab the proper fruit over and over again. In detail:

To set up, deal cards are evenly as possible to all players, then place the four fabric fruits — strawberry, banana, pear, and grapes — in the center of the playing area so that everyone can grab them easily.

If you grabbed the proper fruit — and more than one might exist! — then you place your revealed card on the bottom of your deck. If you didn’t grab a fruit, you discard your card, and if you grabbed the wrong fruit, discard your card and one additional card from your deck. Keep playing rounds until someone discards their final card, at which point whoever has the most cards left wins. 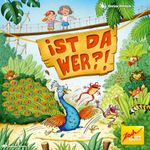 • Grabbing stuff is also at the heart of Ist da wer?!, the first published design from Enrico Feresin, this being a game for 2-4 players aged 5 and up.

A video overview of this game would be easier to grasp, but ideally I have described it sufficiently below for a clear picture to emerge form the bushes:

Ist da wer?! is a hide-and-seek game in which attentive children need to recognize what cannot be seen.

The centerpiece of the game is a “thicket”, that is, a large vertical container that represents a bunch of bushes. Inside this container are twenty wooden discs, two each of ten colors, and you can see these discs inside the thicket through 29 cut-out slots. However, the thicket is designed so that five of the discs will fall into grooves at the bottom of the vertical container, and the discs in these grooves will be hidden by a piece of cardboard underbrush so that they are not visible until you remove the underbrush during play. Ten animals in the colors of the discs are set up in the center of the playing area within reach of all players. Each player also has a stack of nine tiles that when placed together form a picture.

Each round, one player shakes the thicket face down so that no one can see which discs are going where, then they stand the thicket upright on the table. Everyone then grabs for the animals that they think are hiding in the underbrush, that is, the animals that can be seen only once through the cut-out slots — or possibly not seen at all. 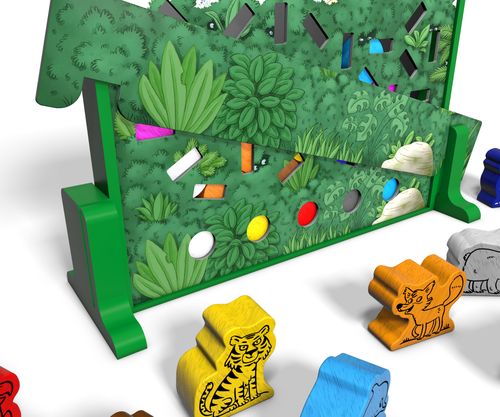 • Auf der Hut — a design from Alexey Konnov, Alexey Paltsev, and Anatoliy Shklyarov that first appeared as Magic Hat and that may in fact be identical to that game — is the only game that I know of in which baldness counts as negative points. Let me know if I’m missing others!

As for how to play this 2-4 player game for youngsters, here’s how:

In Auf Der Hut, you want to be on guard to what others are doing so that you spot the right hats on the right people.

To set up, shuffle the character deck and the hat deck separately, then lay out a row of seven face-up characters (princess, jester, knight, witch, etc.) with a face-down hat card above each character. On a turn, take one of three actions:

—Peek at a hat card, then put it back.
—Swap two hat cards without looking at them.
—Reveal a hat card that you think matches the character below it. Is the cowboy hat on the cowboy’s head, the Viking helmet on the Viking, or more generally, did you make a match? Great! Take this character and their hat, place them in front of you, then draw a new character from the deck and place a face-down hat card above it. If you revealed one of the four wonder hats, then you’ve made a match, but you claim only the wonder hat, replacing it with a face-down hat card. If you failed to make a match, you flip the hat card face down again and take a bald head card as a penalty.

When you can’t refill a spot in the display, the game ends. For each bald head you have, you must cover a hat on a character you collected — but for each wonder hat you have, you can adorn someone who has been stricken with instantaneous hair loss. Whoever has collected the most hats wins!

The Book of Sasquatch, A Book Review

Which Star Wars Board Game Should You Play?

Put Winning Pairs Together in Twin Palms, and Spot Birds of a Feather…Again | BoardGameGeek News

We will be happy to hear your thoughts

Recent Posts
Recent Comments
Deals Of the Day !!
About Us

Forneweducation.com is modern all in one price website that provides the top selling educational products at lower price & keeps you updated through newly added blogs. All images are copyrighted to their respective owners. All content cited is derived from their respective sources.

Subscribe to our weekly newsletter below and never miss the latest product or an exclusive offer.